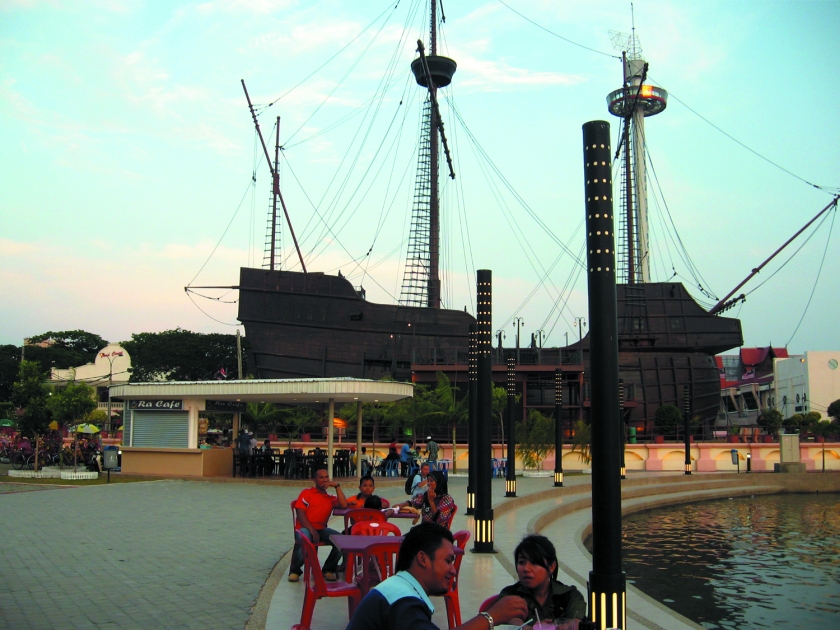 Airasia’s promotional offer was too tempting to resist, just Rs.3000 from Trivandrum to Kuala Lumpur and back. Even while charting out our travel plans we had decided to take an independent route that veers away from organized tour groups and crowds. So we donned our backpacks to travel the 3000 km to Malaysia with the same ease as our last to Sholayar. The great thing about backpacking is that it makes you feel as if you are taking on the world armed with nothing more than a tooth brush and sandals. And in true spirit of an independent traveler we took to roads less traveled and dared to attempt things few people do. Our ten day itinerary included the strawberry farms of Cameron Highlands in Pahang province, rain forests of Penang Island, the UNESCO World heritage city of Malacca and a long train journey from Butterworth in the north to Johor Bahru in down south. YMCAs, budget hotels, public transport and wayside eateries added spice to the travel.

For me this was a journey down the memory lane too, a recap of the tales I have heard as a child from my Malaysian uncles. More than a century ago quite a few of my ancestors had migrated to this part of the world in search of better pastures in the plantations of the high lands and the tin mines of Kuala Lumpur. Though many of them had returned after the world war, a few had stayed back, having settled down as devoted spouses to Malays or Chinese. Though I could not locate any of my long lost cousins, a chance encounter with Richard, a resident of the Portuguese Settlement at Malacca was an unforgettable experience.

We were exploring the lanes and by lanes of Malacca city by foot and noticing a neat row of tiled houses with a big signboard ‘Portuguese Settlement’ we decided to go in. With picket fences, Dutch windows, and raised verandas the place reminded us of Fort Kochi in our own backyard. Leaning on the fence of one of those houses was an old man in his late sixties talking to the lady next door. He was tall and lean but the physical features were not pronounced enough to give away his racial identity. ‘Could be a Chinese, Malay, Thai or even a Tamil’ we guessed. He waved at us and we waved back. “Where are you from?” the first question was from him. On learning that we are from India there was a disarming smile on his face and on further learning that we are from Kerala, he enthusiastically retorted ‘Malayalees?’ with a sparkle in his eyes that I can never forget. The gates were wide opened for us and he made us sit comfortably in his portico. His wife Agnes was away running the boutique owned by them in the Mini market nearby. He offered us some cold drinks and took a deep puff from the cigarette he was smoking and started narrating his life story. All his three daughters were married and settled in different parts of Malaysia. He was in the Malaysian police and retired as a Superintendent of Johor Province. Most of his service was spent in correction and probation, taking care of derelict adolescents from juvenile courts. It was revealing to know from him that most of these boys and girls were from interracial homes. As if reminded of something suddenly he goes inside and returns with an old faded black and white photograph and tells us proudly that “this is my father T. Janardanan Pillai from Kerala”. He was a Chief Clerk in the Malaysian Railways, got married to a Sabah Chinese lady and had died when Richard was in school. He recalled his childhood days spent with his father when he used to tell him about the lush green paddy fields, palm fringed beaches and the much missed festivals of his homeland. Unfortunately Richard doesn’t know from which part of Kerala his father hailed, nor has any contact with anyone from his father’s land. He had never been to Kerala or India. We made a genuine offer of hosting him if he desires to come to Kerala. Tears rolled down his cheeks when he said that he was keeping this secret wish for the last fifty years. It was then that he showed us his amputated feet, a recent complication from severe diabetes grave enough to keep his wish unfulfilled.

This is a text widget. The Text Widget allows you to add text or HTML to your sidebar. You can use a text widget to display text, links, images, HTML, or a combination of these. Edit them in the Widget section of the Customizer.
Loading Comments...
%d bloggers like this: